WHY SCOTLAND NEEDS TO REFORM THE ROLE OF SOCIAL WORKERS

Read the new paper from Colin Turbett here, from the Common Weal website. This history of social work in Scotland highlights how it has been changed, reduced, marginalised. But there is an alternative way.

Listen to the accompanying podcast here.

Social Work Action Network has long promoted campaigns that highlight the devastating impact that denationalising care has had within the UK. Our new pamphlet ‘People Before Profit: The Future of Social Care Scotland’ produced in collaboration with The Jimmy Reid Foundation has just been launched – days before the Supreme Court rules against paying care workers a fair wage for sleep-in shifts.

Agencies often charge families hundreds of pounds a day for 24 hour care and yet workers remain on poverty pay. COVID has highlighted the desperate unfairness and inequality in our care system, and UNISON has launched a petition:

You can get a copy of the SWAN pamphlet here. 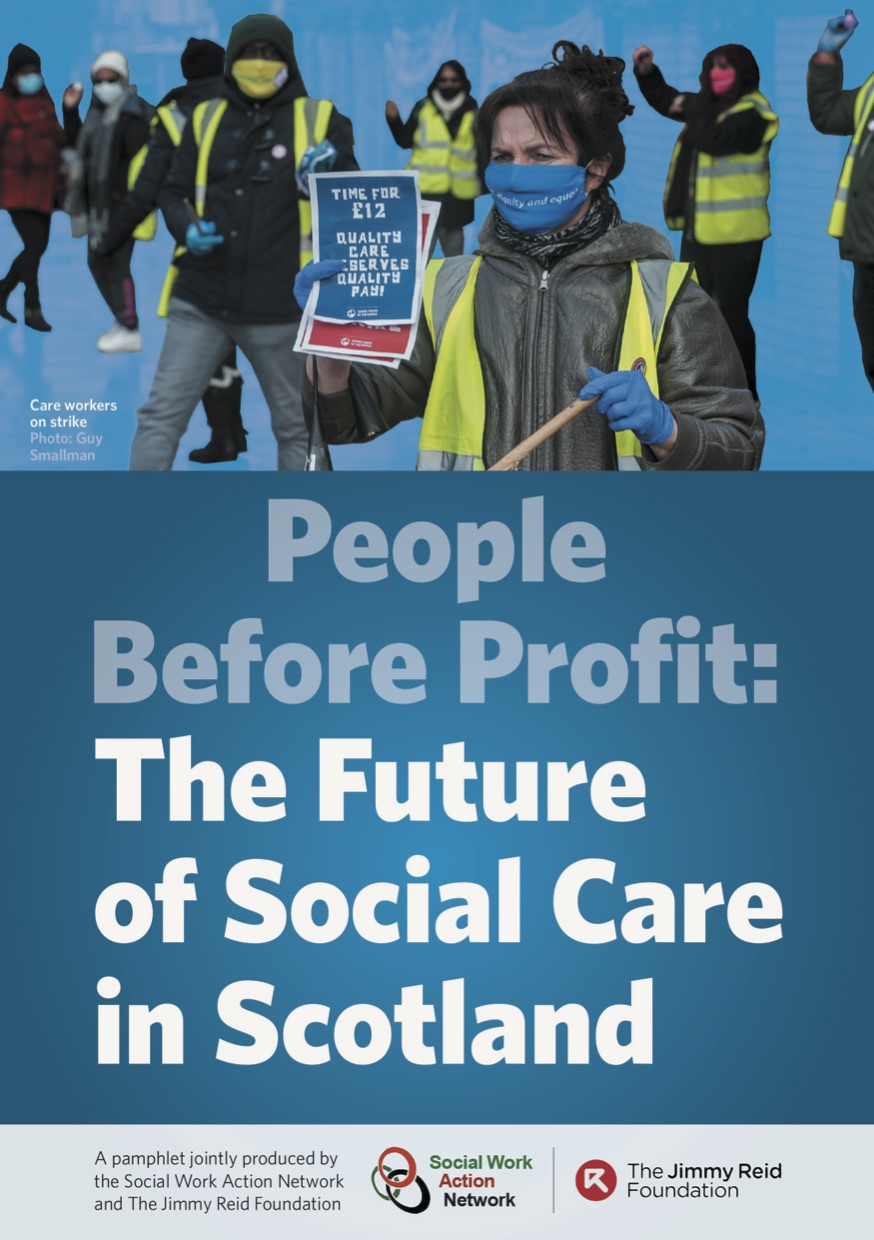 SWAN in partnership with the Jimmy Reid Foundation have brought together a collection of contributions to discuss the need for a better and radical shift in social care. This follows from the Scottish Government commission into a developing a National Care Service following the tragedies of the covid-19 pandemic. Although a review was in the pipeline, the consequence of the pandemic has highlighted the desperate needs for a change in welfare within social care. The Feeley Report has elements that should be welcomed however this does not go far enough and does not end the market influence within social care and limitations to independent living.

This pamphlet aims to intervene in the debate of what changes are need to develop support that takes the profit motive out of social care, arguing that we need a nationalised service that puts the voices and experiences of service users at the front in designing a service that promotes collaboration between service users and social work and care workers, and advocates for independent living, challenging the structural barriers that stop it.

But more important than debating, we need to build a campaign that pushes for a democratically controlled care service not a top down bureaucratic operation that we’ve seen before.

You can order your copy from Calton Books and we encourage you to share with your trade unions, colleagues, friends, carers, and organisations to spread the message of nothing for us, without us. 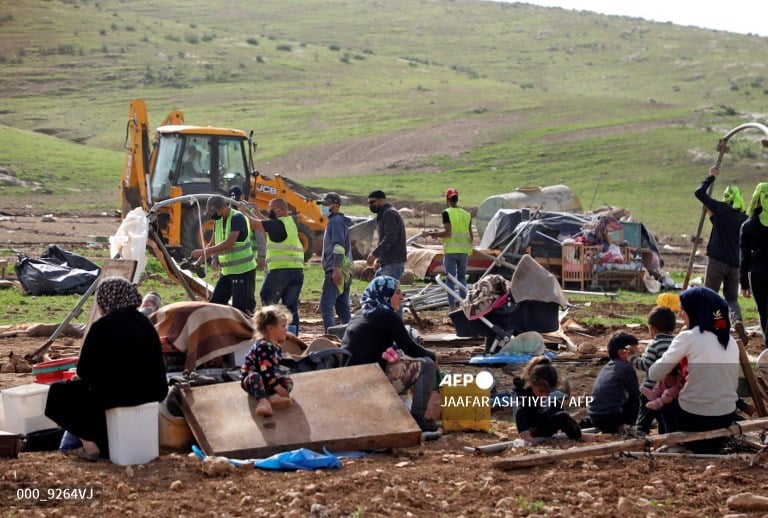 Simon Cardy discusses the background to the call for the NSPCC to stop accepting cash donations from JCB.

SWAN has linked up with possibly its biggest collaboration with other networks and organisations to date namely: Protecting Palestinian Families Campaign, the UK–Palestine Mental Health Network, the Israeli Committee Against House Demolitions – UK (ICAHD-UK) and the Palestine Solidarity Campaign with the aim of stepping up the pressure on the NSPCC drop their partnership with J C Bamford Excavators Ltd (JCB). The coalition aims to support the efforts, led by the Protecting Palestinian Families Campaign, to persuade the NSPCC that it is incompatible with the charity’s core values to take donations from JCB, a British based company that has recently been named by the United Nations as complicit with Israel in violations of international law within the settlements/colonies in the occupied Palestinian Territories.

December 2019 – Lawyers for Palestinian Human Rights (LPHR) launch a formal complaint against JCB, a world-leading construction equipment company headquartered in Britain. The complaint is lodged with the UK National Contact Point (a government body which is part of the Department for International Trade) for the OECD Guidelines for Multinational Enterprises (situated in the Department of International Trade).

February 2020 – United Nations Human Rights Office issue a long-awaited report identifying 112 companies involved in business activities in settlements in the Occupied Palestine Territory in violation of International law. Among the companies identified is JCB, one of three UK companies on the list.

November 2020 – Some 73 people, including 41 children in one day, were made homeless when their dwellings were knocked down in the Bedouin settlement of Khirbet Humsa, in the Jordan Valley, according to a UN report.

February 2021 – the same Bedouin community is demolished for the fifth time in a month, with JCB and Volvo equipment in use.

March 2021 – Day of action against the NSPCC coordinated by coalition of solidarity organisations and SWAN.

Some people might think that the mass expulsions and atrocities that accompanied the establishment of the State of Israel in 1948 and the creation of the world’s oldest refugee population are historical events. The reality is that the state of Israel is continuing with its policy of ethnic cleansing in what is increasingly recognised as an apartheid settler-colonial state, as B’Tselem, Israel’s state’s leading human rights organisation, has recently reported.  In short, a process of ethnic cleaning continues to this day.

ICAHD says that during and after the Nakba of 1948, when the state of Israel was established, it systematically demolished about 52,000 Palestinian homes, more than 530 entire villages, towns and urban neighbourhoods. Since the beginning of the Occupation in 1967, Israel has demolished another 55,000 homes in the West Bank, East Jerusalem and Gaza. Thousands more continue to be demolished inside Israel itself.

The evidence against JCB

A number of organisations have documented compelling video, photographic and written contemporaneous evidence that substantiates the material and prolific use of JCB products in a number of specific demolition and displacement incidents, and in settlement-related construction.

ICAHD states that the demolition policy is ‘part of Israel’s attempt to Judaize Palestine, to transform an Arab country into a Jewish one’. During and after the Nakba of 1948, when the state of Israel was established, it systematically demolished about 52,000 Palestinian homes, more than 530 entire villages, towns and urban neighborhoods. Since the beginning of the Occupation in 1967, Israel has demolished another 55,000 homes in the West Bank, East Jerusalem and Gaza. Thousands more continue to be demolished inside Israel itself.

A key piece of video evidence submitted with the LPHR’s complaint taken on 11 September 2019 can be viewed here.

The video footage shows a JCB vehicle in the South Hebron hills identifiable as the model 3CX, demolishing structures that are likely to be the six family homes reported in the B’Tselem commentary that accompanies the video.

The primary evidence submitted by LPHR that substantiates the material use of JCB products in demolitions, relates to incidents in ten villages or areas in the occupied Palestinian territory, covering a time period of 2016 to 2019. In total, 89 homes are identified as having been demolished, resulting in the displacement of at least 484 individuals, including children and the elderly. One school (Khirbet Tana Elementary School) is among other property documented to have been demolished, as are water tanks.

The evidence demonstrates that vulnerable Palestinian Bedouin communities in Area C of the occupied West Bank are frequently affected by demolitions and displacement, with associated human rights breaches that include the violation of the right to adequate housing under international human rights law.

Under the cover of Covid, with the world’s attention elsewhere and the number of international observers reduced, Israel has continued with home demolition throughout 2020.

As recently as last month, data collectedfrom the United Nations Office for the Coordination of Humanitarian Affairs, B’Tselem, Negev Coexistence Forum for Civil Equality, recorded that, for the month of January 2021, a total of 78 demolitions took place displacing 69 people, 36 adults and 33 children.

Although other machines produced by other companies are involved, JCB plant is consistently being used.

To date, the NSPCC’s response has been craven.

In replies to Protecting Palestinian Families, the NSPCC have shown indifference and a willingness to mirror JCB’s position.

“Co-owner Lady Carole Bamford was on record as giving thousands to the National Society for the Prevention of Cruelty to Children (NSPCC), Indeed, the house where abused children receive the support they desperately need is called Carole House.

So, a carefully crafted letter was sent, acknowledging her benevolence but informing her of the destruction and devastation her products wreaked on innocent families, asking her to cut the company’s ties with Israel.

She didn’t answer so then it was time to ask the NSPCC to cut ties with JCB – how could they possibly accept money earned by traumatising Palestinian children?

A protracted correspondence ensued. CEO Peter Wanless brushed the first letter aside. Then each of the trustees was approached individually.

This time the respondent at least stated the charity’s ethical policy which meant they could not take money made by slavery, human trafficking or child labour. Money made from leaving children traumatised, homeless and impoverished in Palestine was apparently all right.

Dame Esther Rantzen was approached – her life-saving initiative ChildLine is now incorporated into the NSPCC – but she did not answer.”

After lengthy correspondence, the NSPCC eventually responded in December 2020.

The NSPCC states that it is “not associated with any organisation connected with slavery, human trafficking and child labour or where a director or officer has been convicted of a sexual offence” and as JCB is not identified within these criteria, the NSPCC does not agree that JCB has a case to answer.

The NSPCC accepts that JCB is included on a database published by the Office of the High Commissioner for Human Rights, says they have challenged JCB on this point and understand that in reply “JCB have requested immediate removal from the database”.

With regard to National Contact Point’s investigation following a complaint from Lawyers for Palestinian Human Rights, the NSPCC states that the investigation found “the claims related to JCB contributing to abuses of human rights does not merit further examination”.

Finally, The NSPCC have been told by JCB that “that all of the products they supply to Israel are via a third-party independent distributor, Comasco. They state that they have not sold any machinery directly to the Israeli authorities. They state that once products have been sold to Comasco, JCB has no legal ownership of them and they claim, therefore, they cannot stipulate to whom their products can or cannot be sold to.”

There are a number of problems with the NSPCC’s position.

First, the NSPCC’s ethical policy is very narrow in scope.

Second, the NSPCC seem willing to believe that JCB’s request that the UN remove its name from the data base, is sufficient defence: the UN has clearly not removed JCB from the list. The charity seems to make light of the fact that according to reports, accounting for the long delay in the UN’s publication of the list – none of the 112 companies had been identified lightly and – as you might expect – only after lengthy correspondence with the each of the companies named in the report.

In contrast to what the NSPCC would like us to believe, the Contact Point complaint is far from over. The National Contact Point is now offering the parties an opportunity to mediate. If the parties do not want to mediate or cannot reach an agreement, the agency will examine if JCB’s actions and policies are consistent with the OECD Guidelines.

This article sets out the background to the call for the NSPCC to stop accepting donations from J C Bamford Excavators Ltd, a company named by the United Nations in February 2020 as in breach of its Human Rights obligations. The NSPCC claims that they are here for ‘every child’ but not it seems, if that child lives in Palestine.

‘Clearly, not every child is worth fighting for: racism, conscience and the NSPCC’ by Martin Kemp